skip to main | skip to sidebar

Yes, We, the People, still Can! Now is the Time for All Good People to Come Together

Hello and Welcome to the Museletter 2009, The Lives of a Poet.
Given the momentous turn of events in our country since the election of Barack Hussein Obama on November 4th, 2008, I will begin this online journal with a series of responses to the change that has arrived and where we can go from here. The following began as a pre-election day email.

Now is the time for all good people to come together
Beloved friends and family, I'm sending this along to you since i believe it will evoke in you the same sorrow and compassion and give you the same understanding of just how important this election is for all of us.

Yesterday as I was canvassing through Willoughby, my home town, a suburb of Cleveland, I broke down and wept a couple of times when people told me they had already voted for Obama, particularly an older woman of about my mom's age. I was working a suburban cul de sac, a street that had about as many McCain as Obama lawn signs. Of course, as the Democratic precinct captain reminded us, yard signs don’t vote. I was surprised by the positive response I got from folks about the upcoming election. There was such a sense of belonging, of connection, of civic pride, of belief in change that it brought tears to my eyes to have seen this groundswell of civic involvement after the hijacking of our national character. Perhaps my tears also sprang from the sadness these past eight years have wrought on our nation. The deaths of our people and of the Iraqi people brought on by a series of lies for the basest of motives – profit -- while our national treasury was depleted and our debt to the Saudis and Chinese piled up.

I dressed in my Thomas Jefferson costume, who I portray in the schools, a gigantic figure from our founding fraught with the very contradictions at the heart of our country; a man who penned the Declaration of Independence and it’s all men are created equal and endowed by the creator with certain unalienable rights basic premise, but who also owned slaves and did not, at the end of his life, free his African-American mistress, Sallie Hemmings. And yet his ideals live on, providing a path for Obama, via Martin Luther King’s belief in a day where people would be judged not by the color of their skin, but the content of their character, to run for the highest office in our land.

I would get laughs from most folks when I knocked on the door. “Are you the town crier?” “Good Day, I’m Thomas Jefferson for the Obama Campaign,” I replied. Jefferson was the founder of the Democratic party (in a manner of speaking) except it was called the Republican party then, embattled with the money party ie, Hamilton’s Federalists. I would quote several of his more pertinent thoughts on our government to shine some light on this election: We are all Republicans. We are all Federalists. If there be any among us who would wish to dissolve this union or change its form. This government, the world’s last best hope, must not be abandoned on the theoretic or visionary fear. Obama of course echoes this in his line, There are no red states. There are no blue states. There is only the United States. After eight years of divisive politics and beset as we are by war and a catastrophic financial mess, clearly time has come for us to embrace this ideal.

And embrace also the necessary role that government must play in the lives of we, the people – that give and take that Kennedy brought up with his Ask not what your country can do for you, but what you can do for your country. After all, the US is not a giant corporation, though the current administration has been running it as a corporate welfare state, with it’s kickback deals for Cheney’s former company Halliburtan and a revolving door for lobbiest regulating the very industries they once represented. Call it Ameriscam, Inc. But we don’t work for a corporation. The government works for us. We pay their salaries. It seems these Corporate Oilagarchs have forgotten that. Jefferson understood the roles we all play in our government. Here’s another from him: The only thing necessary to close the circle of our felicities is a wise and frugal government which shall restrain men from injuring one another, shall leave them otherwise free to regulate their own pursuits of industry and improvement, and shall not take from the mouth of labor the bread it has earned. Doesn’t that sound, unfortunately, so foreign to us now in these corrupt times. We have given ourselves over to the mantra they shout from the pulpit of wall street, Let the Market Decide, a mantra that presupposes it is some benign force and not driven by human greed.

Jefferson believed also the American people were ready for a government founded not on the fears and follies of man, but in his (her) reason: on the predominance of his social over his dissocial passions. During this campaign I have watched and listened aghast at the level of racism that has once again come to the surface in our society. These dissocial passions. It has gone beyond the usual fear mongering and smear tactics and outright slander that has become the stock in trade of the neo-con ideologues who have hijacked the Republican party -- this from the party of Lincoln! It's a sad shame that McCain has tacitly approved these tactics and lost any credibility. Such is ambition. It seems his last chance for president will stop at nothing to achieve that end.

These attacks have been stirred up at rallies by Palin, an ideologue who believes in neither science nor the constitution, who has little understanding of the workings of civil society, who belongs to an apocalyptic church that prays for the End Times, whose husband is a member of a secessionist, quasi white supremacist organization. She has stoked a climate that has encouraged attendees to scream, in reference to Obama, "Traitor! and "Terrorist!" and "Kill him!" In short, it has become a lynch mob. Lynching of course was used within our living memory to terrorize African Americans in the south, and by extension to discourage them from voting, from practicing their basic rights as citizens, the very reason, spiritually, for the civil war.

One of the reasons King led the march to Washington was to secure voiting rights. Picture the photo of black men in line with a simple sign board slogan, I AM A MAN, as a reminder of basic dignities denied, of Langston Hughes’ American dream deferred. In 1965 President Johnson signed the voting rights act and later admitted he had lost the south for the Democratic Party for a generation. A look at the electoral map from the last two elections bears that prophesy out. Didn’t’ the union win the civil war? The south lost but won the government it seems. This goes back to the founding fathers also: the southern states were going to walk out of the convention if abolition of slavery was added to the constitution, as Jefferson and Washington had advocated. They knew it would come back and bite us in the ass eventually. Can you hear the cannons fire over Fort Sumtner?

Racism persist to this day, on the eve of this most momentous election in our history. I'm sure you have received or seen racist emails or heard racist robocalls. Some are outright grotesque caricatures and downright lies. It is frightening and makes me ashamed that we as a people have not moved beyond this. Will we stand by as another of ourleaders, another Martin Luther King, another Bobby Kennedy, is assassinated? I hope that this man of hope, this man of vision, this man with a plan to unify this country and take us forward is elected and is kept safe by our collectivewill for real change. This government, this America that I am so proud of,"this best hope of the world" cannot at this crossroads give in to fear and hate. Our national character and the fate of our ideals hang in the balance. And if we are not our ideals, who are we?

When I was a boy, about nine years old, I repeated a jingle that had the n-word in it around my father. He took me aside immediately and told me stories about his own boyhood and the racism he experienced and the friends he grew up with when he lived in Marietta, in southeastern Ohio. He made me stand in the corner and think about it. I've never forgotten his words and that lesson and I'm so thankful to him for that reprimand. My father grew up in an environment that was mostly racist. As short a time ago as the 1930s there were almost 1/2million ku klux klan members in the southern part of Ohio (their national headquarters is in southern Indiana). That racism has unfortunately been handed down to their grandchildren.

During a poetry residency at a school teachers' lounge last spring in southwestern Ohio, the majority of the staff was railing about 'that one', that he was a Muslim, that he was not born in America, that he didn't say the pledge of allegiance nor put his hand over his heart. All lies of course. And even if he was a Muslim, as Colin Powell has said, what would it matter? The constitution guarantees the freedom of religion and specifically says that religion will not be used a proof for political office. One teacher did stand up to these lies. And was shunned. They literally turned their backs on her. I think of her as this election draws near. I think of her courage. I think of my father, a Kennedy Democrat whose family, after their farm was foreclosed in the Depression, after they migrated north to find work inCleveland, after they were saved by the New Deal, passed on his belief in equality and harmony; I think of his mother who took me to Washington, who quoted Jefferson and Lincoln to me, who passed on an understanding of what "we, the people' really means. I think of my nephew, enlisting in the army since there are no opportunities for work, and since college is the privilege for the rich. I think of all of you, my friends and family, of how much I love you, how much I love this country, how you are all Americans too; And I think of that elderlywoman yesterday, who, as I was walking away from her home said to me softly and with a smile, "yes we can."

If you haven't voted yet, make sure you do tomorrow. If you have, help bring someone else to the polls to participate in what makes this country great, a free, safe and respected election where everyone's vote is counted!
Posted by Ray McNiece at 9:09 AM No comments:

Welcome to the MuseLetter

Hello Good People and Welome to my Genesis as a Blogger. I'll be posting musings, anecdotes, grumblings and sweet etceteras, so y'all come back now, hear.
Posted by Ray McNiece at 9:51 AM No comments:

from the American Revolution 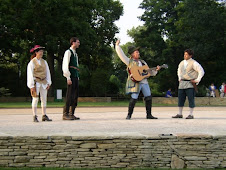 Battle of the Bands of Brave Patriots (Concord Massachusetts)